The Wißmann monument has stood in Bad Lauterberg’s spa gardens since 1908. It has survived two world wars without being melted down. That says something about the importance attached to it. Apart from that, it is indeed a work of art in which the sculptor Johannes Götz has skillfully combined various aspects. Wißmann holds a map on his knee and looks into the distance under a pith helmet. His long saber, a gift from the Sultan of Zanzibar, hangs defiantly at his side; epaulets indicating his military rank. Looking at the bronze man, the viewer is reminded of a military commander as well as a pioneer advancing into unexplored territory. The designer of the large spa park, in which the monument is integrated, also understood something of his craft. Bad Lauterberg does not have a more prominent place to offer. Next to the prestigious Kurhaus, in whose hall major social events take place, is the park. In summer, spa guests enjoy the sun on the large terrace. Apart from the twittering of birds and the chattering of ducks, the only sound to be heard is the quiet splashing of the adjacent Oder River. A place of relaxation, surrounded by shady trees, flowerbeds and well-tended greenery. In front of the terrace is a small open space with benches and a duck pond with a water fountain. The benches are aligned to a concert shell, a few meters away from it, vis-à-vis the Kurhaus, stands the approx. 2.20 meter tall bronze Wißmann on a large erratic boulder at the duck pond. Although the monument, all in all, should measure 4.50 meters, it does not tower above its surroundings. Rather, the bronze man blends into a background of tall trees. There is no more popular photo motif in the idyllic ambience of the spa park. Thousands of corresponding picture postcards have been sent all over the world for over a hundred years. All this serves tourism, which is an important economic factor of the Kneipp spa. If the bronze man were removed, the town would not only be deprived of its landmark, but the entire concept of the spa park would be thrown out of balance. One would have to replace the monument with something else. As long as this decision-making process has not yet matured, the time is occasionally bridged by small acts of sabotage. In the 1980s, for example, unknown persons decorated the buildings of the spa park with political slogans, including spray-painting the question „Why the best for the guests?“ on the spa house in large letters.
Most of all, however, tempers flare when it comes to criticism of Hermann von Wißmannn; after all, this is a matter of politics and historical interpretation. When the Anti-Fascist Working Group Bad Lauterberg organizes its demonstration against the Wißmann cult and the Schutztrupp meeting taking place at the site in October 1982, it is met with broad social rejection and leads to a spectacle of a special kind. About 120 people form a demonstration procession, which is curiously observed and resented by 10 times the number of onlookers. Behind many curtains stand locals, others are bolder, leaning out of the shutters or lining the demonstration route. Occasionally there is shouting from the ranks of the onlookers, who remain at a distance and rather form a threatening backdrop. As a demonstrator, you feel like you’re in between the gauntlet and the bystander. Much has changed since that time. Today, society is looking for a different way of dealing with the colonial past. It is remarkable, for example, how the city is responding to criticism from some civil society groups about the local Wissmann representation in 2020. With almost breathtaking speed, the commemorative plaque of the Schutztruppenverband, which had stood on the gravestone of his mother and sister in the mountain cemetery since 1971, is disappearing. Likewise, the additional plaque of the tradition association at the Wißmann memorial is dismantled and replaced by a large information board. The text is debatable, but such measures would have been unthinkable just a few years ago.

There is another flyer of the antifascist working group, which calls for Saturday, October 17 to the film „Nazis, are they still there?“ and subsequent rock against right concert with the group Abraxas in the town hall. The band travels from Northeim, there is no music scene in Bad Lauterberg and the surrounding area. For the following day, when the Schutztruppler lay their wreath at the memorial, the film „Namibia fights“ is announced. But despite all the effort our events are not very well received. Only the Schutztruppenverband reacts and asks for police protection for its wreath-laying ceremony. In order to drive the tradition federation into the parade, it requires thus other means than info. booths, meetings or the stealing of wreath ribbons. We are never at a loss for arguments and are even better positioned in terms of content after Lothar joins us. He studies ethnology in Göttingen and devotes himself with scientific meticulousness and doggedness to the topics Hermann von Wißmann and Schutztruppenverband. We soon publish the paper „Wissmann – a Prussian career“. The title refers to the popular documentary film by Joachim Fest „Hitler – a career“. The title page also attempts to draw analogies between colonialism and fascism, in that Wissmann is written in sigrunes and the swastika flag of the Reichskolonialbund flutters behind a drawing of the Lauterberger monument. The subheading then also reads „the story of a colonial criminal“. With all the trimmings, the scientifically correct text, although very tendentiously written, comprises 34 typewritten pages. The work is distributed as a photocopy under our group name. In addition, the title drawing of the brochure is at the same time the poster motif for our demonstration against the ‚colonial troop meeting‘, which everything boils down to in the course of 1982.

Fiery atmosphere in the spa park 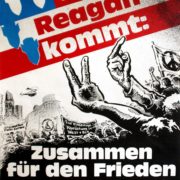 When Cowboy Ronny comes to Town